Benjamin Franklin’s journey to Philadelphia at 17 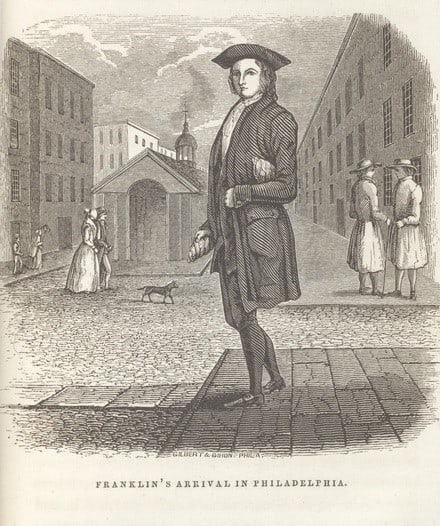 On January 17th, 1706 Benjamin Franklin was born in Boston, Massachusetts.
When he was 17 he traveled to New York and on to Philadelphia, but his journey wasn’t easy.
“Franklin arrived in New York in October, 1723,
without money or letters, and at the inexperienced age of 17. He failed in finding employment there; but was told by Mr. William Bradford, a printer, who had moved to New York from Philadelphia, that he could probably find employment in the latter place, as the son of Mr. Bradford, who was a printer in Philadelphia, had just lost his principal hand by death. Accordingly, our young adventurer pushed for Philadelphia, going by boat to Amboy, and leaving his chest to come round by sea. He had a rough passage in the boat, being overtaken by a squall, driven out of his course, and forced to anchor near Long Island, where nobody could land on account of the surf. The boat leaked, and he passed a wet, uncomfortable night, without rest and the next day made a shift to reach Amboy after being thirty hours on the water, without food, or fresh water, or any other drink than a bottle of filthy rum.

The next day, somewhat refreshed by sleep, he started on foot for Burlington, distant about fifty miles, where he expected to find boats for Philadelphia. He was three days on the road, one day drenched with rain, and every day heartily tired. He was questioned, and suspected too, from the miserable figure he made, to be a runaway, and began to wish he had never left home. When he reached Burlington he had the mortification to find
that the regular boats were gone, and that there would be no more until Tuesday, the day on which he arrived at Burlington being Saturday. But toward evening a chance boat which happened to be passing took him on board. There was no wind, and they rowed until midnight, when, being uncertain where they were, and not sure that they had not passed Philadelphia, they pulled into a creek, landed and made a fire, and remained there until daylight. Then they perceived that they were a little above Philadelphia, and taking to their oars, arrived at Market Street wharf about eight o’clock on Sunday morning. This tedious journey from New York to Philadelphia is a strong contrast to the present mode of traveling, when people are dissatisfied if they are as many hours on the road as Franklin was days. But his toilsome journey, and his not very prepossessing entrance into Philadelphia, are in yet stronger contrast with his afterlife and standing there. We will let him describe his first appearance in Philadelphia in his own words:
“I have been the more particular in this description of my journey, and shall be so of my first entry into that city, that you may in your mind compare such unlikely beginnings with the figure I have since made there. I was in my working-dress, my best clothes coming round by sea. I was dirty from my being so long in the boat. My pockets were stuffed out with shirts and stockings, and I knew no one, nor where to look for lodging. Fatigued with walking, rowing, and the want of sleep, I was very hungry; and my whole stock of cash consisted in a single dollar, and about a shilling in copper coin, which I gave to the boatmen for my passage. At first they refused it, on account of my having rowed, but I insisted on their taking it. Man is sometimes more generous when he has little money than when he has plenty; perhaps to prevent his being thought to have but little.
“I walked towards the top of the street, gazing about till near Market Street, where I met a boy with bread. I had often made a meal of dry bread, and inquiring where he had bought it, I went immediately to the baker’s he directed me to. I asked for biscuits, meaning such as we had at Boston; that sort, it seems, was not made in Philadelphia. I then asked for a three-penny loaf, and was told they had none. Not knowing the different prices, nor the names of the different sorts of bread, I told him to give me three-penny worth of any sort. He gave me accordingly three great puffy rolls. I was surprised at the quantity, but took it, and having no room in my pockets, walked off with a roll under each arm, and eating the other. Thus I went up Market Street as far as Fourth Street, passing by the door of Mr. Read, my future wife’s father; when she, standing at the door, saw me, and thought I made, as I certainly did, a most awkward, ridiculous appearance. Then I turned and went down Chestnut Street and part of Walnut Street, eating my roll all the way, and, coming round, found myself again at Market Street wharf, near the boat I came in, to which I went for a draught of the river water; and, being filled with one of my rolls, gave the other two to a woman and her child that came down the river in the boat with us, and were waiting to go farther.
“Thus refreshed, I walked again up the street, which by this time had many clean-dressed people in it, who were all walking the same way. I joined them, and thereby was led into the great meeting-house of the Quakers near the market. I sat down among them, and, after looking round a while and hearing nothing said, being very drowsy through labour and want of rest the preceding night, I fell fast asleep, and continued so till the meeting broke up, when some one was kind enough to rouse me. This, therefore, was the first house I was in, or slept in, in Philadelphia.”

From: The pictorial life of Benjamin Franklin; embracing anecdotes illustrative of his character by H. Hastings Weld, published in 1847. Source says not in copyright
https://archive.org/details/pictoriallifeofb00weld/page/43