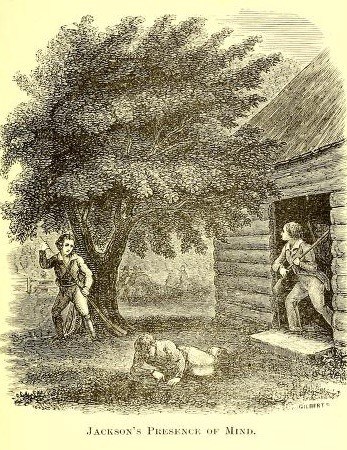 “Boys, big enough to carry muskets, incurred the dangers of men. Robert and Andrew Jackson had their guns and their horses, and were almost always in company with some armed party of their kindred and neighbors. Men could not sleep unguarded in their own houses, without danger of being surprised and murdered.

It was upon such an occasion, that Andrew Jackson gave the first illustration of that quickness of conception, and readiness of action, which afterwards placed him in the highest rank of military chieftains. A patriot captain, named Lands, desired to spend a night with his family. The two Jacksons and six others constituted his guard; they were in all nine men and seven muskets. Having no expectations of an attack, they all, with the exception of a British deserter, who was one of the party, went to sleep. Lands’ house was in the centre of an enclosed yard, and had two doors, facing east and west. In front of the east door stood a forked apple-tree. In the south-west corner of the yard were a corn-crib and stable, under one roof, ranging east and west. On the south was a wood, and through this wood passed the road which led to the house.

A party of the Tories had become apprised of Lands’ return, and had determined to surprise and kill him. Approaching through the wood, and tying their horses behind the stable, they divided into two parties, one going round the east end of the stable, intending to enter the east door of the house, while the other went round the west end, making for the west door. At this moment, the soldier, who was awake, hearing some noise in the direction of the
stable, went out to see what was the matter, and perceived the party, which was entering the yard at the east end of the building. Running back in terror, he seized Andrew Jackson, who was nearest the door, by the hair, exclaiming, “the Tories are upon us!” Our young hero ran out, and putting his gun through the fork of the apple-tree, hailed the approaching band. Having repeated his hail and received no answer, and perceiving that the party still rapidly advanced, and were now only a few rods distant, he fired. A volley was returned, which killed the soldier, who, having aroused the inmates of the house, had followed young Jackson, and was standing near him. The other band of Tories had now emerged from the west end of the stable, and mistaking the discharge of the advance party, then nearly on a line between them and the apple-tree, for the fire of a sallying party from the house, commenced a sharp fire upon their own friends. Thus both parties were brought to a stand. Young Andrew, after discharging his gun, returned into the house; and with two others commenced a fire from the west door, where both of his companions were shot down, one of them with a mortal wound.

The Tories still kept up the fire upon each other, as well as upon the house, until startled by the sound of a cavalry bugle in the distance, they betook themselves to their horses, and fled. The charge was sounded by a Major Isbel, of the neighborhood, who had not a man with him, but, hearing the firing, and knowing that Lands was attacked, gave the blast upon his trumpet to alarm the assailants.

General Jackson was then only fourteen years old; but who does not recognise in the boy of 1781 the general of 1814? By his fire from the apple tree he brought the enemy to a stand, and saved his little party from capture and massacre; by rushing down upon the enemy on the night of December 1814, he saved an army from capture, and a city from plunder.”